After touring Cerros, a Preclassic Maya site in Belize, my guide took me a few miles down the New River to a lake covered in lily pads. The ancients cultivated them in great quantities to freshen ponds and encourage the growth of fish. The pads and stalks were dried to fertilize fields. Significantly, the lily pads played a key role in referencing the beginning of time and annual time cycles. Kings wore representations of lily pads in their headdresses, to associate themselves with aquatic deities.

Coming back from the river, the guide slowed the boat and steered it into the tree-line with lianas streaming down without an inch of land. I helped him push the veil of vines aside and we entered a tiny lagoon.

Inside, we were surrounded by thin, tall trees—red mangrove. They converged overhead like the dome of a cathedral, their roots digging into the ground on both sides. The guide informed me that the “ground,” was mangrove wood turned to “peat” that had accumulated over the years and the banks were closing-in on both sides. The long roots support the trees against battering waves, especially on coastlines where there’s also a changing tide. High up, the leaves filter out and excrete salt from the water. I was in awe of the place—so still and quiet with lots of colorful fish swimming among the roots.

In the time of the ancient Maya, both black and red mangrove trees lined the banks of most rivers and saltwater inlets. They used the wood of the red mangrove, in particular, for construction posts in houses and other structures. Besides growing strong, tall and straight the wood is more salt-tolerant than other species, excluding it from being taken up in its roots. The little salt that is taken up, is stored in the leaves. When they’re full, they fall. It’s said that an acre of red mangrove can produce a ton of leaves in about a month. The Maya (and other cultures) used them to make a refreshing tea.

Different mangrove species around the world have been found to have numerous healing abilities because their tannin contains anti-fungal, antibacterial and antiviral properties. Mangrove tree bark, leaves, fruits, roots, seedlings and stems are currently used to heal wounds and treat diarrhea, stomachaches, diabetes, inflammation, skin infections, conjunctivitis (pink eye), and toothaches. It can even be used as mosquito repellent.

One study showed that compounds in red mangrove (Rhizophora mangle) tannin reduced gastric acid and increased mucosal protection to help heal stomach ulcers. Another study revealed that the tannin reduced bacterial strains such as the Staphylococcus aureus, which can cause skin and respiratory infections as well as food poisoning. The ancients also used mangrove roots to make dyes for tanning.

All around us, bobbing on the water like upright string beans, were many dozen of 10-12 inch long seed-pods. Researchers refer to them as “propagules” because they grow high up on the parent tree. My guide pulled one of the pods from the water and explained that they fall and float some distance to disburse, “looking” for water of suitable depth. When they become waterlogged they sink to the bottom and germinate to form the roots of another tree. The experience was so moving, I made it the setting for an important scene in Jaguar Rising: A Novel of the Preclassic Maya.

Maya archaeologist Heather McKillop, believes the abandonment of an Early Classic site, Chan B’i in Belize, and later inundation of the salt works in Paynes Creek, “may be related to mangrove disturbance. The felling of mangroves to establish workshops, alongside the impacts of trampling halted the production of mangrove peat at the workshop locations, with the rising waters subsequently covering the sites.” Mangrove peat was used extensively to enrich soils.

It’s estimated that two-thirds of the fish we eat spend part of their life in mangroves. This is because the underwater roots provide an ideal protected environment for young fish. Because their roots hold the soil in place, they prevent erosion and degradation of the coastline during hurricanes and storm surges. They store 10 times more carbon in the mud than land-based ecosystems, which is a major defense against rapid climate change. And they reduce ocean acidification, which helps to prevent coral bleaching. A case has been made by some researches that mangroves do more for humanity than any other ecosystem on Earth.

Increasingly, mangroves are being threatened by rising sea-level, water pollution and in some cases being cut down to provide better ocean views. They’re battered by wave-strewn trash, goats eat them and barnacles choke them. Of native mangrove around the world, 35% have been destroyed, mostly due to shrimp farming. Once gone, the land erodes and tides and currents reshape the coastline, making it nearly impossible for them to grow back. After Typhoon Haiyan devastated the Philippines’ coastal communities, the government planted a million mangroves but because the trees were planted without regard to locating the right species in the right places, many of them died. 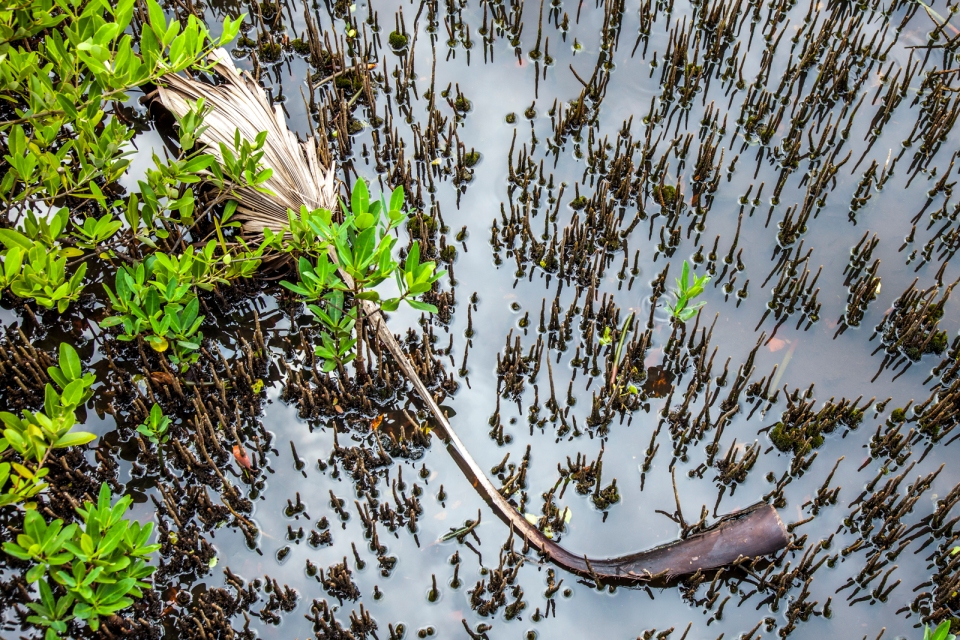 My guide backing the boat out of the mangrove “temple.”

Mangrove trees symbolize strength and support. The image of their intertwined roots evokes several questions relevant to the human situation. For instance, who and what anchors us in the ebb and flow of everyday living, including the emotional storms that threaten to topple our dreams,  desires or decisons? Who comes to mind as the person or persons who provide regular and ongoing acknowledgment, encouragement or inspiration? Who can we count on when the going gets tough? What can I myself do to stay grounded in purpose? And how can I support the people in my circle?

In a world moving at hyper-speed, where so many of us are anxious because of the rate of change, the soulful move is the move toward contemplating the source of things deeply rooted in eternity, the things that always are.

Approaching my special place, I paddled even harder and she gripped the sides of the canoe. Roots and canopy with thorns in between. Sorcerer’s talk. I turned sharply toward a wall of brush that covered the eastern bank and fronted a forest of tall mangrove trees. “Before I take you home I need to tell you something. Not out here where everyone can see.”

“You should take me home.”

“I know. But jadestone promise, I will not touch you.” I stopped the canoe in front of the wall of vegetation and we changed places so I could stand on the bow to open a passage into the tangle of prickly brush, vine and trees. Butterfly helped me pull us through the vegetation. On the other side, we entered into an open space, a dark grotto, where the water was reddish brown but clear and shallow. “I come here when I want to be alone,” I said. Mangrove trees rising straight and very tall surrounded us. Overhead, they bent together to form an arched canopy with tightly interlaced fingers.

“This must be what a temple is like,” Butterfly whispered.

“It is a temple,” I said. “House of the Mangrove Lord.” Almost within our reach on both sides, mangrove fingers anchored the trees in muddy banks. And tiny fish nibbled at them. Had it not been for the dappled sunlight, we would have thought it was dusk.

Butterfly’s hands covered her chest. She was feeling what I felt the first time I entered the grotto. “How did you find this place?”

“I saw a fisherman come out when I was running a message down river.” I reached over the side and plucked one of the hundreds of long pods that floated upright. “Mangrove seeds—red mangrove,” I said handing it to her. “They fall from the canopy, drift and eventually sink to the bottom. Wherever it sticks, it grows a new tree. When hundreds grow together like this, their fingers get thick and grip into the mud to made new land.”

Butterfly shook her head. “How do you know so much?”

“I have many teachers,” I said. Sitting well back from her, I took a deep breath. “That day at the bench when you brought me tamalies?” She nodded. “Thunder Flute set a burden on my shoulders—something I need to tell you.”

“He was scolding you? Red Paw said the bench is where he—”

“Laughing Falcon ordered him to tell me something he did not want me to know until the Descent of Spirits. You are not going to like this, but it will change my life. It already has. I want you to hear it from me.”

Butterfly gripped her arms, as if from a chill. “You are frightening me.”

I took a breath, but it didn’t calm my pounding heart. “Thunder Flute is not my father. I am not a Rabbit.” Her eyes fixed on mine and a little wrinkle appeared in her brow. “Mother was gifted to him in gratitude for saving the life of a powerful man’s son—when he was on expedition. This man gave her to him, not knowing that I was growing in her belly. No one knew, not even the man who planted his seed in her. She was too afraid to tell him. I touched the earth when the expedition was on the way home. It happened in a cave, while Huracan was throwing a tantrum.”

“Did he tell you who your father is?”

“He is called Jaguar Tooth Macaw.”

“I have heard that name. Your mother might have—”

“He is the Lord of Kaminaljuyu—about forty k’inob south of here.

“Higher. Much higher. More like his father at Mirador.”

Like not feeling a cut until it is seen, it took a moment for Butterfly to understand the implications of what I was saying. When she did, she pulled back. “Then your blood is hot!” The canoe rocked as she went to her knees, steadied herself and bowed with crossed arms.

I tried to explain further, but she wouldn’t say anything. I backed the canoe out of the brush. Underway again on open water I realized she might never speak to me again, so I spoke the whole truth about White Grandfather’s dream of me sitting on a rock watching stars that stand still, about finding rather than capturing the doe and fawn, about journeying to the other worlds and the misery of living at the lodge—caused by Thunder Flute. Still, she wouldn’t respond.

At the last bend in the river I paddled hard into the lagoon. In silence, we passed White Flower House, the docking area, the old district and then the long stretch of forest that backed on the Rabbit reservoir. 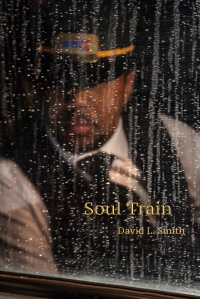 NOTE: My novel, Soul Train, is available on amazon.com. It’s about the family life and happenings off and on the train, particularly conversations with passengers, that constitute the protagonist’s journey of spiritual inquiry.

I welcome your feedback at <smithdl@fuse.net>

Photography Monographs (Click on the pages to turn them)